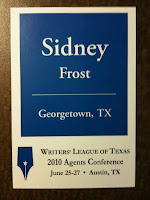 I attended the Writers' League of Texas (WLT) 2010 Agents Conference June 25-27. All attendees had an opportunity to meet with an agent for ten minutes. Well, I say all, but I'm sure there was a limit and some people who waited until the last minute to register may not have had an agent conference. We were allowed to prioritize our choice of agents and I was lucky enough to get my second choice. As it turned out, I may have liked my third, fourth, or fifth choice better.

I practiced my pitch for Vengeance Is Mine while driving from Georgetown to Austin and it took about 30 minutes. So, while giving the pitch to the agent I cut a lot out to make it fit the time allowed. What I said didn't seem to matter. The whole time I was talking, he was looking over my shoulder to what was happening behind me. I wanted to turn around to see if there was some good looking gal back there, but I looked at him as if he was paying attention. It took self control to continue.

I told him about winning first place with Where Love Once Lived in the manuscript contest in the WLT 2007 Agents Conference and how I was publishing it with CreateSpace. He said that was good and he suggested CreateSpace might be good for the novel I was pitching. I took that as a signal my time was over, and, besides, he was still more interested in someone behind me than me. As I was about to leave, he said I could send him a query once I am pleased with Vengeance Is Mine and have had positive feedback from several critique partners. I doubt if I'll send him anything.
Posted by Sidney W. Frost at 6:00 AM