Writing While You Walk

Those of you who are writers know what I mean when I tell you what's happening to me right now. I write all day, getting caught up in my fictional world, and then when I get out of the house to get some exercise, the fictional world continues to expand in my head. The creative process doesn't stop simply because I walk away from the keyboard. If anything it seems to become stronger when I'm at places where I can't easily stop and make notes, while walking, for example, or driving, or in the middle of a church service. Sometimes it works and sometimes it doesn't I don't know how many times I've come home with a church bulletin covered with rapidly written, undecipherable hen scratch in the margins. What I thought was an important piece of information for my work in process often ends up in the recycle bin.
But sometimes I end up with something brilliant.
Here's what I did yesterday while out walking. I had my iPhone with me so I stopped when the idea hit. I paused RunKeeper, the app I use to track my progress, and typed in a note. Later, a friend from church said he saw me sitting on a bench on the side of the road doing my email. Aha. Little did he know I was writing the Great American Novel.
What I had written was something I thought of to put at the beginning of a scene I had written earlier that day where Chris in Vengeance is Mine is working on a new textbook:
There was nothing better than a pending deadline and an empty bank account to awaken a sleepy muse. Include narrative section of textbook on digital forensics and white hat hacking. From experience, only change names and places.
That brief note expanded to the following:
The next night, I cancelled the meeting with Liz and Tex, to stay home to work on the textbook. For the first time since Sarah's death I was actually writing. Not just holding my hands over the keys while staring at the screen. Not just filling the chapter with exercises copied from what I had posted on Blackboard for my students. I was creating again. Finally. There was nothing better than a fast-approaching deadline and an empty bank account to awaken a sleepy muse.
I read over the digital forensics section I had just written. It was good. I couldn't see a need for changing anything. It was written from memory based on my experience with the burned disk drive I had found in Albuquerque, and presented in a narrative style the students would find interesting. Well, at least the editors would, and wasn't that what mattered now. I told how I was able to find information on the disk, what software I used and showed examples of what the data looked like in hexadecimal. It was a near true story. All I did was change the names and places.


After that I made it through a section on white-hat hacking based on information my Dad had told me. Again, I changed enough of it so that no one could be identified. Also, I didn't tell them everything. There was enough to arouse the student's curiosity, but not enough to help anyone break the law.
Before I got home from that walk, another inspiration hit me, this one for the final scene of Act II. I didn't stop since I was close enough to the house to make it home without forgetting. I repeated the first two sentences of my dazzling prose all the way home, knowing that the rest would follow. Here it is:
It's Christmas eve, Chris. Thought you might want some company.
Here's how I expanded the note:
There was a black man standing outside my cell. He was wearing a dark blue suit with a red badge on his coat lapel that had the word "Chaplain" large enough to be seen from where I sat on the edge of my cot.
"Hi, son," he said. "It's Christmas eve. I thought you might like a little company."
I stared at him with what I knew must be hate as I walked to the bars where he stood. It didn't faze him. His smile warmed the cell. I didn't care. He was the last person in the world I wanted to talk to. Christmas eve. Hmph. Christmas without Sarah. Come to think of it, I was better off here in jail than back home at church without her. I'd never have another Christmas with Sarah. I'd never have another minute with her.


"Didn't you read my booking form?" I said it loud enough for the other inmates to hear. "I wrote atheist on it where it asked about denomination. You didn't see it?" Atheist might be too strong. Maybe I was an agnostic. Maybe I didn't know. That made me laugh, the not knowing part.
"I read it. Doesn't matter what you wrote, I can see in your heart that you love your Lord and God and always will."
I laughed. "That's funny. If you could look into my heart you might be surprised what you'd see. You might even have to run tell the guard." I turned and walked to back of the small cell wanting to put distance between us.
"I know, son. That's why I'm here. To help you get beyond your loss so you can feel the love of God once more."
When he said the word 'loss', I turned around quickly to face him. Then it hit me, he didn't know about Sarah. He was just guessing.
I laughed again and sat on the edge of my cot, still laughing as I leaned back.
"I'm praying for you, son," the black man said. "Here's a Bible for when you're ready for it."
He was silent after that. I couldn't resist looking to see if he had left and when I did he was nowhere in sight. He'd placed the Bible just inside the bars on the floor. I wanted to leave it there and let him find it sitting in the same place after I was out of here. But I couldn't. There was a piece of paper sticking out of one side and it was crooked. I could get by without reading the piece of paper, but I couldn't resist straightening it.


I stood and quietly walked to the bars. I looked as far as I could to the left and then the right. No one was in sight. I picked up the Bible and grabbed the paper to make it line up with the pages of the Bible, but it wouldn't move. It was stuck inside somehow. I opened the Bible to release the skewed paper and when I did I saw a verse had been highlighted in yellow. Who would use a highlighter on a Bible? The verse marked was Romans 12:19. I read it, but I knew it from memory because of so-called photographic memory.  "Beloved, never avenge yourselves, but leave room for the wrath of God; for it is written, 'Vengeance is mine. I will repay, says the Lord.'"
I felt a chill, but shook it off. Just a coincidence. That verse would probably apply to most of the guys here. I flipped through the pages of the Bible looking for more yellow ink. I found two more. The first was Colossians 3:13. "Bear with one another and, if anyone has a complaint against another, forgive each other; just as the Lord has forgiven you, so you also must forgive."


The third verse I found marked in yellow ink shocked me even more. It was Matthew 28:20. "…and teaching them to obey everything that I have commanded you. And remember, I am with you always, to the end of the age."
I would love to hear your comments, either about these first draft excerpts from Vengeance Is Mine, or your comments on the way you create.

Where Love Once Lived on My Father’s Oldsmobile

I’m pleased to say Where Love Once Lived is featured today on Shawna K. Williams’ blog My Father’s Oldsmobile. See: http://shawnawilliams-oldsmobile.blogspot.com/2010/11/author-interview-sidneyw-frost.html.
Shawna is the author of No Other, In All Things, and a soon to be published Christmas story, Orphaned Hearts. I read No Other and loved it. I’ll be reading the other two books soon.
Please go to her blog and read the interview. She asked some questions no one has asked me before and I believe the results offer insights into the book that have never been published before. Also, I hope you will all comment on her blog.
Posted by Sidney W. Frost at 8:24 AM No comments: Links to this post

Email ThisBlogThis!Share to TwitterShare to FacebookShare to Pinterest
Labels: In All Things, My Father’s Oldsmobile, No Other, Orphaned Hearts, Shawna K. Williams 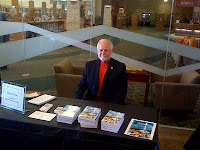 I had the opportunity to participate in another book signing, this time at the Harker Heights Public Library. Harker Heights, Texas is a part of the Kileen-Temple-Fort Hood Metropolitan Statistical Area. The official population was 17,308 in 2000, but I saw a lot of growth there, including the library which appeared to be a new addition to the city facilities.
The staff treated us graciously, with coffee, juice and pastries when we got there, and lunch afterward. I didn’t get all the names of the other authors, but here a list of most of them: Emery Lee, Renae Brumbaugh, Alison Craven Roberts, Michael T. Leslie,  George I. Duhart, Malcolm  L. Dickinson, Sonia Simmons Wren, Barbara Youngblood Carr, Charles “Skeeta” Jenkins, and Phil Hewitt.
The authors’ tables were in the front hallway leading into the library proper on one side and a large conference room on the other side where a used book sale was going on. There was a constant flow of patrons while I was there between 9:00 a.m. and 1:00 p.m.
Around 11:30 a.m., the authors of children's books, went into the library and talked about their books. After they finished, the rest of the authors were invited to talk or read from their books. The audience in the reading section was surely increased due to the free sandwiches and snack foods available there.
We had a limit of five minutes. I had selected two excerpts and planned to check who was in attendance before deciding which one to read. The first one was the first half of the first scene in the book. It was a part of the book that wouldn’t require any back story. The second choice was the Great Chase scene near the end of the book. I scanned the audience and decided to read the chase scene. Since it was so far into the book, I took a minute or so to tell them about the characters.
I only sold one book, but it was fun. I met some interesting people and made contacts for the future. One of the authors there invited me to be on his TV show to talk about my book. Another author had some great books for tweens that I think my grandkids will enjoy. So, all in all, it was a successful event.
Posted by Sidney W. Frost at 6:00 AM No comments: Links to this post

Where Love Once Lived is featured on Inspirational Ebooks today, a blog created and written by Shawna K. Williams, author of No Other and the soon to be released sequel, In All Things.

I met Shawna on the American Christian Fiction Writers (ACFW) book club
when we discussed her No Other. See my review here: http://christianbookmobile.blogspot.com/2010/10/book-review-no-other-by-shawna-k.html

Please read what Shawna has to say about Where Love Once Lived, and leave a comment to show you were there.
Here is the link: http://inspirationalebooks.blogspot.com/2010/11/where-love-once-lived-sid-frost.html

Thank you, Shawna, and thank you dear reader for going to Inspirational Ebooks to read the post.

Posted by Sidney W. Frost at 7:48 AM No comments: Links to this post