Smashing Selections Brighten the New Year in This January Clash

What an exciting 2016 kick-off for Clash of the Titles. Readers can choose from a teen novel, mystery, suspense/ thriller, love trilogy and an Amish novella collection of sweet romances. One of each sounds good. Peruse the selections, decide which to put at the top of this year's to-be-read list, scroll down, and vote for it on the form below. Voting starts today, January 20th, and goes through midnight PST on January 26th. 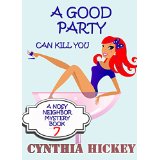 What Stormi doesn't expect is the final, life-altering gift from Matt's ex-girlfriend. Nor does she expect her bachelorette party to lead to murder.

Jake escapes from the remote Appalachian cabin—the only home he has ever known. And Father hunts him down with the very rifle he used to kill Sam and Mama.

In the novella, An Apple a Day, Dr. Brian Coridan needs a break so he vacations in quiet Blossom Lake, Wisconsin where he never expects to be distracted by Talia Fountain, the town's "health food nut." In September Sonata, Krissy and Blaine's marriage is in its autumn season...or is it just over?—and in Let it Snow, they were once a couple, engaged to be married, until Shari Kretlow ran off with another guy, but decades later, Shari is a widow who finds herself stranded in a Wisconsin blizzard on Christmas Eve, and it's her former fiancé, Brenan Sheppard, who comes to her rescue.

Spend a year in Amish country with four sweet romances.

Email ThisBlogThis!Share to TwitterShare to FacebookShare to Pinterest
Labels: Clash of the Titles, COTT