Many years ago, while a student at the University of Texas, my friend Rollo Newsom helped me get a job as a bookmobile driver at the Austin Public Library. Although I was assigned to work with several librarians, one of my favorites was a lot like Liz in Where Love Once Lived. She was constantly doing more for the patrons than a librarian was expected to do. I started writing a book about my experiences that was something like Suds in Your Eye by Mary Lasswell. I never finished that book which was more of a series of episodes rather than a novel.

When I started writing Where Love Once Lived, I thought of Jan Karon's Mitford and decided to use a bookmobile to make the locale in my book smaller and more manageable than all of Austin, Texas. As it turned out, one third of the scenes take place on the bookmobile. So, I learned to love that vehicle and have included it in my next book and I have a plan for a third and fourth book that includes the bookmobile. Although there are some crossover of characters, the books are all independent. 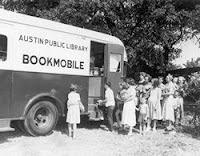 I told you some about my next book, Vengeance is Mine, in previous posts, but I haven't mentioned it includes a bookmobile. Liz is the crossover character and she is now the head librarian. The city has now bought its own bookmobile, so, when Chris and Tex's van is damaged by gunfire received when they visit El Paso, Liz offers them the use of Brian's bookmobile for the trip to Galveston. It is wheelchair ready and has a Internet connection. When Liz travels to Galveston to bail them out of jail, she jumps in the bookmobile for the ride back to Austin. Before they leave Galveston, they learn the killers are in Houston. Chris encourages Liz to fly home, but she insists on going with them. So the bookmobile is back in action, with Liz aboard.
Let me know what you think about this use of a bookmobile. Many of my friends don't understand it, but I like it.
Posted by Sidney W. Frost at 6:00 AM