The Benefits of Manuscript Contests 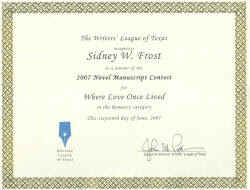 I told you yesterday about attending the Writers' League of Texas 2010 Agents Conference. What I didn't mention were the thoughts that went through my head as the winners of the manuscript contest were announced at the conference luncheon.

Every winner was there and went to the podium to accept the award, pausing to pose for a photo. Then, after all received there awards, there was a group photo.

I sat there thinking about how I missed this when Where Love Once Lived won first place in the Romance category in 2007. Did anyone wonder why I wasn't there? They mailed the certificate to me. I could have been there, but I was home in Georgetown preparing to leave the next day for a trip to China. Had I known I had won, I would have gone just for the luncheon and presentation.

I don't know how many people were there this year, but there had to be hundreds. Everyone I talked to was working on something, fiction or non-fiction, and all were encouraging and helpful.

• Why It's Never Too Early to Start Thinking About PR & Marketing

• Social Media: How to Make It Work for You--Rather Than You Working for It

• Book Promotion in the Digital Age: Dos and Don'ts From the Media

If you get a chance to go to a conference for writers, please do. If nothing else, you'll feel the positive vibes from the other attendees.

In addition to conferences, enter every writing contest you can. I learned more from some contest judges than I did from many others who have read my work.
Posted by Sidney W. Frost at 6:00 AM