I received the sketch for the book cover for Where Love Once Lived yesterday. In an earlier posting, I told you how I had answered the questionnaire about the cover:

A: A potential reader should know by looking at the book that it is Christian in nature. That can be as subtle as a cross or a partial view of a church. Not too flashy. Solid looking. Peaceful. There could be an interior or exterior view of a bookmobile since it plays a big part in the story. The main characters are in their mid-fifties, but they first fell in love thirty years earlier while in college. The male lead character has a neatly trimmed beard and light brown hair. The title is Where Love Once Lived. Brian thinks he will find love by returning to the city and the job where he last felt love, but instead, he finds happiness when God's love returns to his heart, where it once resided.

Then, last Wednesday, I talked to the CreateSpace account manager about the cover and I reported this in a recent blog:

I told her I see a man and woman looking at each other with a bookmobile in the background with children near it. I said I would like a symbol to show it is a Christian novel, but I wasn't sure what. She said the artist would read everything they have about the book and then come up with a sketch. 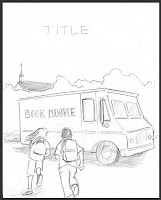 Now, take a look at the sketch I received yesterday.

Here is my response:

I love the bookmobile, the children running, and the trees and church in the background. However, without more, the book could be mistaken for a book about children or a book for children. The main characters are in their mid fifties and the book is about them getting back together again after thirty years. The man has a well-trimmed beard.

Perhaps the sketch could be reduced in size by at least 50 percent and moved to the background. In the foreground could be a man and woman looking at each other, maybe touching, but not a full hug or kiss.

I'm also concerned about the size. I know the sketch doesn't have to be to scale, but the perspective is off as is. The book size is 5 1/4 x 8.

Bookmobile is one word.

Let me know what you think. I started to ask for comments before responding, but the cover sketch needed to be changed so much I thought it best to get started on it.

Some of my friends with books published by standard publishers are amazed at how much input I have in designing the cover, so I can at least be happy about that.
Posted by Sidney W. Frost at 6:00 AM