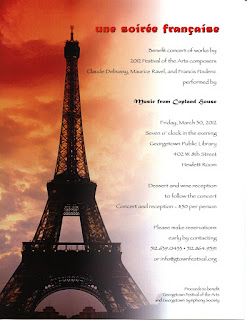 The term Plot Thickener came to me as I listened to a concert recently. I was with my wife enjoying a benefit concert in a small room in the Georgetown, Texas, public library. As the pianist, violinist and celloist played, I relaxed and before long my mind was totally involved in a new novel I'm working on. I had a good outline and had written the first draft of about a quarter of the book. I would have thought my mind would work on the rest of the book. Instead I came up with a  way to make the entire book more interesting. The idea took the basic plot and made it richer and fuller. That's when the term plot thickener popped up. I thought about the process of making gravy thicker by adding more flour or by cooking it down.

As soon as the ideas came to me I wanted to take notes. But no one in the small group was making a sound or moving. Even the group's photographer had been asked to refrain from taking photos. I couldn't write on the program the way I sometimes jotted notes on the pew bulletin during the sermon. Even if I wanted to risk distracting the people around me, I had no pencil and had purposely left my iPhone in the car, another way I make notes at times. Besides, the information was coming to me so fast I wouldn't have been able to record it in time.

What I did was sit still and replay the ideas in my head over and over again until I felt I would never forget them. As a bonus, the ideas were expanded each time I repeated them. By the time the concert was over, I had additions to the plot in my head that would fit perfectly into existing scene outlines from start to finish. It was an exhilarating feeling. And no one noticed.

When I got home, I typed as fast as I could so I wouldn't forget the details. I ended up with more than 1,500 words which would probably be two or three times as long when written out with all the tags and descriptions. The next day, I copied the ideas into the book, either the part already written or the scene descriptions. When I got to the last scene, I cried. The changes made the story more powerful and the ending more poignant. Although I knew the emotion would eventually come, this was the first time the story had moved me to this degree.

Later, I Googled "Plot Thickener" and came up with a crossword puzzle clue, two songs, two comics, and a slew of other things. Then, I saw what I had in mind. In a 2002 Washington Post article (http://www.washingtonpost.com/ac2/wp-dyn/A53078-2002Jul23?language=printer) Linton Weeks uses the term Plot Thickeners to describe writers hired by well-known authors to flesh out their bare-bones stories. That's what I was doing, fleshing out my bare-bones story.

I intend to try this technique again. The music was by Claude Debussy, Francis Poulenc, and Maurice Ravel, an all French night. I'll try to listen to music again to relax the mind and see what happens. I'll also try working without pen and paper or computer. Refining the ideas in my head allowed me to work faster. Repeating it for memory helped me flesh out the ideas.

What about you. As a writer have you had similar experience?
Posted by Sidney W. Frost at 1:25 PM