What’s wrong with our world?

Shouldn’t a God who claims to be all powerful and flawless prevent suffering? How can we continue to believe when storms rage on in our lives? If you’ve ever had tough questions like these, the Struggles and Triumphs Study Guide is the book for you.


Author Cynthia L. Simmons will guide you toward answers with her unique and enlightening approach. Her twelve-week Bible study for ladies comes from stories of real women as told in Struggles and Triumphs

. As you study, you’ll come to understand God’s perspective on timeless issues that impact your life. The carefully chosen Scriptures combined with interesting historical information will challenge and encourage you.

Cynthia L. Simmons and her husband, Ray, have five children and reside in Atlanta. She has taught for more than twenty years as a homeschool mother and Bible teacher. Active in Christian Authors Guild (CAG), she conducts writing workshops and has served as president, vice president, and conference director. In December 2009 the membership granted her Life Time Membership for her numerous contributions to writers.


While promoting her book, she was interviewed on radio and TV across the nation and nominated for 2008 Georgia Author of the year. She also conducts monthly podcasts called CAG Spotlight in which she interviews authors and VIPs in the writing industry. At present she is completing a twelve week Bible study using the stories in Struggles and Triumphs

The Story Behind the Book

My stomach knotted as I gazed at my youngest son, Caleb. I checked on him often, but he hadn’t moved in several hours. He lay on his back turning one toy in rhythm.  Was something wrong? Homeschooling his four older siblings consumed my time, and I thanked God Caleb was sweet and quiet. I never dreamed he was in the autism spectrum. No, he didn’t talk, but he didn’t need to. His adoring brothers and sisters made sure he lacked nothing.

As my husband and I compared notes, a pattern emerged.  Caleb didn’t behave like a four year old, and a professional confirmed developmental delay. He advised me to teach Caleb kindergarten material. Right away I encountered trouble. Caleb couldn’t pay attention—not even a few seconds. I had to hold his face in my hand and almost touch his nose to instruct him. If he made a mistake, which he often did, he threw himself to the floor and screamed. Ear-splitting shrieks! The task appeared insurmountable, so I took classes, researched and studied.

Finally a doctor did extensive testing and gave us a diagnosis. It almost plunged me into depression. His numerous labels took half a page.  Rather than use therapists on a consulting basis, I hired one full time. But that created another problem. The new therapist disliked me because I had the arrogance to educate a child so troubled. She treated me with disdain.  Within a few months, I was sick.  I saw my doctor and his concern alarmed me. I worried I’d have to stop homeschooling.

In desperation, I cried out to God. His response took me by surprise. I became interested in a prominent individual from the past and began historical research. Stories of faithfulness I unearthed delighted me. I gleaned courage and perseverance from believers who lived before me. My outlook changed, and my health returned. Despite the challenges, I continued to teach Caleb alongside professionals, and he improved. God gave me grace through each struggle. Today my son’s a gracious young man who’s ready for vocational training. 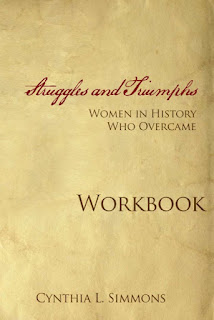 God comforted me, and I felt a responsibility to pass it to others. So, in 2004, I joined a Christian Authors Guild. The group offered education, encouragement, and critiques. I achieved success in publishing with newspapers and magazines as well as group publications.

After a little research, I discovered much of the uplifting material I loved hadn’t found its way into print. In Struggles and Triumphs: Women in History Who Overcame, I told anecdotes of prominent women whom I’d grown to care for like Katie Luther and Susannah Spurgeon. The twelve week Bible study guide pulled issues from each story. For instance, Henry VIII of Britain planned to arrest his wife, Kateryn, because she advised him on spiritual matters.  The Bible study sent the student to Scripture to examine Kateryn’s choices and discover the meaning of biblical submission. I hope to encourage women toward a deeper understanding of their faith while also demonstrating God’s ability to use difficult circumstances for our good.