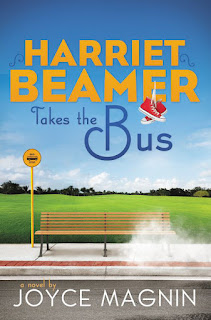 This is the story of Harriet Beamer, a seventy-two year old widow who had been living alone in Philadelphia. After falling while decorating her Christmas tree, her daughter-in-law Prudence tricks Harriet into selling her home and moving in with her and Henry, Harriet's son.

When Harriet realizes what happened, she reluctantly keeps her promise to move, but decides to take her time making the long journey to Grass Valley, California, near Sacramento. Not only does she want to get there on her own terms, she wants to visit some places along the way. Her late husband hadn't liked to travel and so they had never made any trips. Since she was a long-time collector of salt and pepper shakers, one place she wanted to go to in particular was the Salt and Pepper Shaker Museum in Gatlinburg, Tennessee.

Harriet sells her house, says goodbye to her friends, ships her belongings to California. Her dog Humphrey, goes on ahead on the plane. Her plan was to take local buses only to make the trip more interesting and longer. But she soon learns that is not possible. Although she takes a local bus when possible, she travels in a variety of ways including a helicopter, a motorcycle sidecar, and trains. She meets many interesting people along the way, some help her and some she helps, some we can only guess, but hope Harriet has blessed them all in some way. One person, David Prancing Elk, told her about a good place to go to look at the stars. So she went there. She gained some fame along the way. A YouTube video of her stopping a thief was broadcast around the world and, at another time and place she managed to help the police catch a couple who had stolen her credit card.

When Harriet was alone on the trip, she pulled out her journal and wrote to her late husband Max and told him about her day. This gave the reader insights not possible otherwise. Along the way, alone in a hotel room or a B&B, Harriet grieved in a way she probably never did while living at home. She missed her husband in a new way. She probably grieved because of the change happening in her life as well. She had been used to talking to Humphrey and with him already in California, she had another reason to be sad. But it's mostly a fun book, not a sad one.

There are ups and downs, tears and laughter, all the way across the United States. However, there's more. It could have easily turned into a series of episodes  in each town Harriet visited with no depth. But it didn't. A subplot involving Henry and Prudence gave the story deeper meaning and more interest. In addition to that, the way Harriet changes throughout the trip makes it much more than a series of short stories.

I laughed and cried and all the while kept turning pages to see what would happen next. To me, that means Harriet Beamer Takes the Bus is well worth the read.

Disclosure of Material Connection: I received an advance review copy of this book free from the publisher. I was not required to write a positive review. The opinions I have expressed are my own. I am disclosing this in accordance with the Federal Trade Commission’s 16 CFR, Part 255 : “Guides Concerning the Use of Endorsements and Testimonials in Advertising.”