COTT Judging A Book By Its Cover

Last week Clash of the Titles held their first ever Clash of the Covers. This fast-paced clash was different than their usual fare, because instead of judging the author's story, we judged how well their cover designs matched their theme or made us want to pick up the book. There were four books to vote on, from authors Cathy, Erica, Lacy, and Maggie. The books were Marrying Miss Marshal, Spring For Susannah, A Bride's Portrait, and Deeply Devoted.


It was a VERY CLOSE race and it saw enough voter participation to max out the scoreboards!


Some of the comments included:
Spring for Susannah - Susannah is aware of the man but she looks as though she could turn away, or turn towards him.
Marrying Miss Marshall seems to speak volumes about the heroine--just in her position.
The cover of A Brides Portrait, really sells the title by having the woman with a camera on it. Caught my attention.
I love cover C...looks like the "old west"!!!
Marrying Miss Marshal. Hmm, with that rifle laid across her lap, one wonders who's daring enough to approach her, much less marry her. Intriguing.
I loved A Bride's Portrait of Dodge City - it added so many components of the story into the cover besides just a profile :)
Love this (A) - it's intriguing. I'm not sure from the picture whether she's toting for justice, revenge, or protection. Makes me curious.

The Champion Book that was voted
BEST SETTING THAT CAPTURES THE MOOD OF THE TITLE:
Springtime For Susanna, by Catherine Richmond 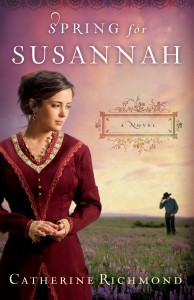 This week, COTT is sporting a holiday/winter theme with host Gail Pallotta. We expect it to be another huge turn-out so please join us. We'll cozy up to the virtual fireplace, egg nog in hand, and browse for books. In this case, it's okay to judge the cover. =)

We’ll be taking a break December 26 – January 6
And then come right back on January 9 with a new clash that will – literally – take your breath away! If you're an author, don’t forget to check upcoming open clashes and submit
Posted by Sidney W. Frost at 6:00 AM

Email ThisBlogThis!Share to TwitterShare to FacebookShare to Pinterest
Labels: Clash of the Titles, COTT, Michelle Massaro