The first three books in April W Gardner's Creek Country Saga have just hit the Amazon shelves! They are now available for purchase, but every subscriber to her newsletter gets the first in the series for
FREE!

Scroll to nab your copy!

Beneath the Blackberry Moon will sweep you away to another time, then make you sigh and wish you could stay just a little longer. 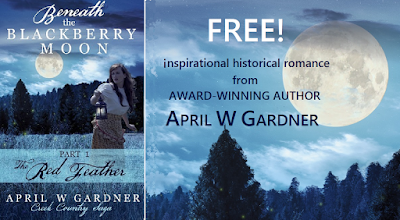 I cannot put this book down! April Gardner crafts the scenes and character interactions so well, you are there! What a powerful story.
~Amazon reviewer

This newsletter goes out only a handful of times each year to announce new releases, so no worries--your inbox won't be bombarded. April is generous to her email subscribers. Next month, each will receive another novel, absolutely free! See below to learn more about Better Than Fiction.

About the book:
War, captivity, hunger that will not be denied. And a blackberry moon with enough pull to endure the test of time.

Frontierswoman Adela McGirth has never feared her neighbors, the Creek Indians, but a suspicious encounter with a steely-eyed warrior shakes her confidence. As dreaded, a skirmish with the natives sends her family fleeing into a hastily constructed fort. But no picket is strong enough to hold off a party of warriors who fear nothing but the loss of their ancient ways.

Totka Lawe, a Red Stick bound by honor to preserve his heritage, will do what he must to expel the whites from Muscogee soil. But in the midst of battle, he is assigned to protect those he’s expected to hate and kill. One of whom is the copper-haired woman who has haunted his thoughts since that strange night under the blackberry moon. The war was simpler before his enemy became a beautiful face with a gentle warrior’s spirit he cannot resist.

But what woman would have a warrior whose blood-soaked hands destroyed her life?

Then again...does she have a choice?

To get your FREE copy of Better Than Fiction,
SUBSCRIBE HERE
(releases April 2016)

Better than Fiction
by
April W Gardner and Michelle Massaro

Romance novelist Meghan Townsend’s marriage is slipping, and no amount of prayer seems to help. She aims to recapture her husband’s waning attention by getting in shape and finds escape by crafting her own fictional love story. Taking inspiration for the hero from a new friend—the attractive, spiritual, and attentive Curtis Jameson—she pours her yearnings onto the page, and craves the kind of pulse-pounding romance found in her book, Racing Hearts…

In 1916 Corona, California, motorcars are all the rage, and racing them is what Meghan’s hero, Russell Keegan, does best. But when his competition vandalizes his car, the only mechanic available is a greasy woman in a man’s overalls.

After a racing accident claimed her father’s life, Winifred became the sole breadwinner for her family. She is disdained as a female mechanic, but her daddy's trade is all she has left. Can she swallow her hatred of the races and take up Russell's offer of big bucks to fix his car, or will she lose everything to mounting debt?

Under Meghan's skillful pen, these two embark on a thrilling, adventurous romance. But she finds that writing those love scenes with Curtis’s face in mind takes her heart places it shouldn’t go. Will she realize in time that real life can be better than fiction?