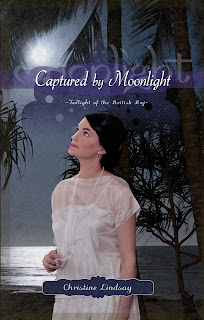 CAPTURED BY MOONLIGHT
Prisoners to their own broken dreams...

After a daring rescue goes awry, the parched north of India grows too hot for nurse Laine Harkness and her friend Eshana. The women flee to the tropical south…and run headlong into their respective pasts.

Laine takes a new nursing position at a plantation in the jungle, only to discover that her former fiancé is the owner…and that Adam has no more to say to her now than he did when he crushed her years ago.

Eshana, captured by her traditional uncle and forced once more into the harsh Hindu customs of mourning, doubts whether freedom will ever again be in her future, much less the forbidden love that had begun to whisper to her. Is faith enough to live on? Or is her Savior calling her home?

Amid cyclones and epidemics, clashing faiths and consequences of the war, will the love of the True Master give hope to these searching hearts?

* Review by Top Amazon Reviewer, Diana Flowers--"I have ten authors who are my favs...with Shadowed in Silk--Book One and Captured by Moonlight--Book Two, Christine Lindsay has made it into my top five!"
* Award-winning author Catherine West—"Christine Lindsay's attention to detail, witty prose and moving story line all blend together to create a treat for the senses, leaving the reader satisfied and completely satiated by the end."
* Award-winning, multi-published Author Jeanette Windle—"A worthy sequel to acclaimed debut novel Shadowed in Silk."


About the Author:
Irish-born Christine Lindsay writes award-winning historical novels. In Shadowed in Silk and Captured by Moonlight, Christine delights in weaving the endless theme of God’s redemptive love throughout stories of danger, suspense, adventure, and romance. The Pacific coast of Canada, about 200 miles north of Seattle, is Christine’s home.

Email ThisBlogThis!Share to TwitterShare to FacebookShare to Pinterest
Labels: Captured in Moonlight, Christine Lindsay, Clash of the Titles, COTT