COTT: A Sense of Mission--Fiction that Honors America's Heroes

Clash of the Titles is proud to endorse a novel from an author so accomplished, her work has made the cut on several of on our contests--the most recent being our September New Releases Clash. 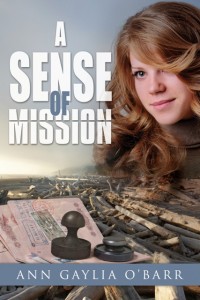 About A Sense of Mission:
Kaitlin is driven to succeed in the mission denied her mother. Can she redeem that mission if she discovers another calling? Kaitlin Sadler is nine when her diplomat parents are killed in a U.S. embassy bombing. She must leave the overseas world she knows to live with her guardian, Matilda, on Simon Island in Puget Sound. Determined to redeem the tragedy of her parents' deaths, Kaitlin makes a binding decision to become a diplomat in the U.S. State Department's Foreign Service and pursues it relentlessly as she grows up. But is that really what her heart wants? And why does a niggling memory vanish every time she fights to remember it?

Ethan Coverwood, Matilda's nephew and a friend of Kaitlin, is on a diplomatic career path of his own. When the two are assigned to posts in Saudi Arabia during the Gulf War, something more than friendship begins to brew. But will it be strong enough to unite two people who could be reassigned to different continents in the blink of an eye? Enough for Ethan as he struggles to carry out America's policies in a chaotic world? For Kaitlin as she agonizes over the desperate people she meets in her duties? A courageous love. A reawakened passion. A vibrant step of faith. By the acclaimed author of Singing in Babylon, Quiet Deception, Searching for Home, and Distant Thunder.


About author Ann Gaylia O'Barr:
The background for many of Ann’s novels is based on her experiences as a Foreign Service officer for the U.S. Department of State 1990 to 2004. Her posts included U.S. embassies and consulates in Saudi Arabia (twice), Algeria, Canada, Tunisia, and Washington, D.C.
She’s been writing full time since 2004. OakTara has published Singing in Babylon, Quiet Deception, Searching for Home, Distant Thunder, and this novel, A Sense of Mission.
She writes novels about Christians who learn the value of their faith when new cultures and beliefs challenge them. She calls it “global fiction.”


Q. Where did you get the idea for this story?
A. I think A Sense of Mission is my answer to the many tragic events in the world today in which innocent people are harmed. Kaitlin became the fictional story of one lone person, far from perfect, who overcame and even redeemed a horrible tragedy in her life. Love redeemed a potential life of fear. As a letter from Jesus’ beloved apostle, John, states: “Perfect love casts out fear.”


Q. You say you write “global fiction.” What is that?
A. Such fiction suggests writing from a global viewpoint. Characters in my stories are American Christians who struggle with personal faith issues, fall in love, and deal with family problems as in other fiction. In the midst of these conflicts, however, they understand Christianity as Jesus-centered for the whole world. Often they have global jobs: journalists, teachers in international schools, or jobs abroad for the U.S. government, as I had. They learn the value of their faith in countries where Christianity isn’t the majority faith.

To learn more about Ann and her stories, visit her at her website: www.AnnGayliaOBarr.com