Clash of the Titles is excited to introduce readers to C.E. Laureano's new release, Oath of the Brotherhood. We have heard nothing but good things about this book, which we recently featured on our site. Oath... is a stunning Christian Fantasy set against a Celtic backdrop. It's the first in the new Song of Seare series and will take readers through battles both physical and spiritual. Magic, prophecies, warriors, and romance...what's not to love? Take a look-- 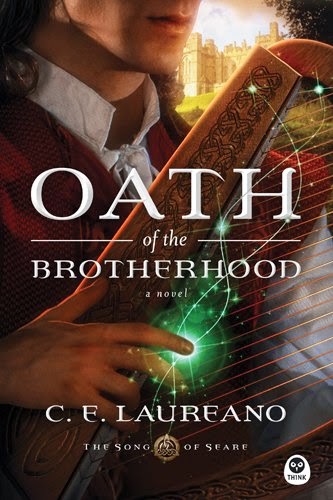 Q: What inspired the story behind Oath of the Brotherhood?
A: I’ve always loved both epic fantasy/adventure and Celtic fantasy, but I really hadn’t seen a lot of books that combined both, especially not for the Christian market. The dark ages period of Ireland’s history is so fascinating: high kings and clan conflict, traveling bards, and mercenary knights, not to mention the gradual Christianization of the country. I had fun incorporating all those details into my story world in a new way.

Q: What can you tell us about the main character?A: Conor Mac Nir is a king’s son who has been raised in fosterage (as was common with Celtic clans) by one of his father’s lords. But instead of being raised as a warrior as the king expected, he was educated as a scholar and a musician. When he’s clearly found to be unsuitable as a successor to the throne, he gets sent to a neighboring kingdom as a hostage to secure a peace treaty. Only then does he learn that his upbringing was no accident, and there are multiple parties pulling his strings behind the scenes.

Q: What was your favorite part of the story to write?
A: I really liked the fight scenes and the “training chapters” when Conor finds he really does need to learn how to handle a sword. The isle of Seare isn’t quite as disconnected from the rest of the world as the real Ireland, so I got to mash up some traditional western swordplay with Greco-Roman wrestling and eastern martial arts training methods.


I’ll admit that I also enjoyed incorporating the love story between Conor and the young healer/seer, Aine. Their relationship is deep and has a sense of destiny to it, even considering that they’re in their late teens, but I also think it’s healthy and grounded. They have a great deal of respect for each other’s callings and abilities.

FROM THE BACK COVER

An island at the edge of the world. An ancient prophecy. A reclusive warrior brotherhood. When evil encroaches, who will find the faith to fight it?

To his clan, Conor Mac Nir is a disappointment—gifted with a harp, but hopeless with a sword. To the beautiful young healer Aine, he’s one whose gift calls out to her own . . . and captures her heart. To the reclusive warrior brotherhood called the Fíréin, he may be the answer to an ancient prophecy . . . if he can be trained to fight. Can Conor and Aine find their true path as an ancient evil engulfs the isle of Seare? Must Conor sacrifice everything he loves, even Aine, to follow the path God lays out before him?

WHAT PEOPLE ARE SAYING

“Laureano pulls readers into this story and does not let them go. From the first page to the last, readers are gripped by the multifaceted story of Conor Mac Nir and Aine, who are trying to save the country from physical war and spiritual evil. 4 ½ stars.” – RT Book Reviews (June 2014 Top Pick)

“Rich with Celtic lore, battle, and competing magics, Oath of the Brotherhood is a heroic coming-of-age fantasy experience and an inspired series opener.” –Serena Chase, contributor, USA Today’s Happily Ever After blog

“Song of Seare is a promising new fantasy series with a vast storyworld that hints at more wonders to come. I loved this book!” –Jill Williamson, Christy Award-winning author of By Darkness Hid and Captives

Email ThisBlogThis!Share to TwitterShare to FacebookShare to Pinterest
Labels: C.E. Laureano, Clash of the Titles, COTT, Fantasy, Ireland, Oath of the Brotherhood