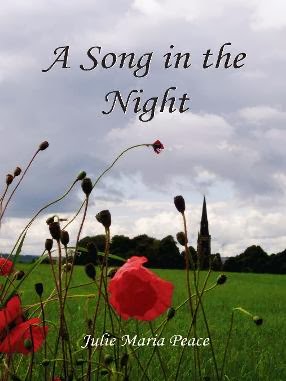 I read A Song in the Night by Julie Maria Peace not too long ago. It was published in the UK and, being an American and Texan to boot, I had a bit of trouble with some of the words and phrases. At my age and because of the number of books I've read over the years, I thought I knew English fairly well. Turns out, not so much.

I could figure out some of the words by the way they were used. Others, I found in dictionaries. Still, there were a few I haven't yet found. I should mention that part of the book took place during World War I, and I believe the author used terms from that time period to be more authentic. However, most of the ones I stumbled on were from the contemporary time.

I was reading the book because the author had asked me to review it. I am glad she did because I loved it. You can read my review here: http://christianbookmobile.blogspot.com/2013/11/book-review-song-in-night-by-julie.html, an interview of the author here: http://christianbookmobile.blogspot.com/2013/11/q-with-julie-maria-peace-author-of-song.html, and sample chapters here: http://christianbookmobile.blogspot.com/2013/11/book-review-song-in-night-by-julie_27.html.  As I read and noticed the many differences in our English languages, it hit me that a book I was just finishing up may not make sense to English readers in the same way I was struggling with Julie's book. One thing led to another until at some point she agreed to read The Vengeance Squad Goes to England and look for words and phrases the English characters wouldn't say. We let the Americans visiting England use their version of English, except for the main character, Chris. He is slightly OCD and has an eidetic memory, so he picks up on the differences in English and began to speak the way his girlfriend Angela does. Julie did a marvelous job, and I know the changes made because of her greatly improved the book.

Now, back to my concern for the words and phrases in A Song in the Night I don't understand. I put my guess in parentheses in the list below. Would you look over the list and either tell me if I was right, or let me know what some of these mean? Use the comment section below so everyone can see what still needs to be done. Oh, by the way, I didn't think about it at first, but at page 55 I started adding the page numbers.

Email ThisBlogThis!Share to TwitterShare to FacebookShare to Pinterest
Labels: A Song in the Night, American, England, English, Julie Maria Peace, The Vengeance Squad Goes to England, UK, World War I