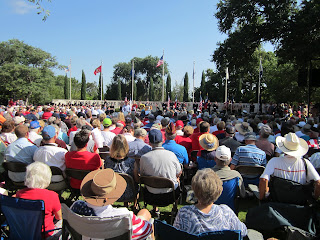 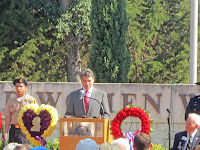 I've attended the Sun City Memorial Day Ceremony nearly every year since it began ten years ago. The ceremony is held in the Georgetown-Williamson County Veterans Memorial Plaza in Sun City, Georgetown, Texas, less two miles from our home. We took the golf cart, knowing parking would be a problem. We went early to get a place to put our folding chairs. Still, we barely got there in time to get into the inner ring of grass between a sidewalk and the memorial wall. It was not a shady spot and the sun was bright and hot. The ceremony is short, but getting there so early turns it into a longer time in the sun.

This is our second year to share this time with Celeste's son Dane Johnson and his family, wife Chrissy, sons Jakob and Hawk.

In attendance were veterans from as far back as World War II, who stood and were applauded. Then all veterans were asked to stand. Many men and women stood, some in uniforms that no longer fit and some with military caps or shirts designating their unit. Another group was separately honored, that of those currently on active duty. I saw only a few, five or six, in front of me, but there could have been others. 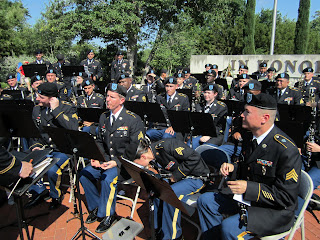 The music was provided by the 36th Infantry Division Band of the Texas National Guard. The color guards were from the Navy Junior ROTC at Georgetown and Stony Point High Schools, the Georgetown Fire Department, and the Williamson County EMS.

The Ladies of the Robert Gilbert Livingston Chapter of the National Society of the Daughters of the American Revolution passed out the programs at the start of the ceremony and cookies and lemonade at the end.

The Invocation and Benediction was given by Chaplain James Shaw, Colonel, U.S. Army, Retired.

It was a ceremony that makes you proud to be an American. 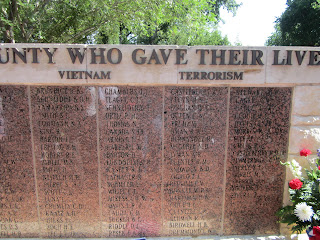