“I knew that I had just been given an amazing true story that needed to be told.” –Rosslyn Elliott, Clash of the Titles 2011 Laurel Award Winner 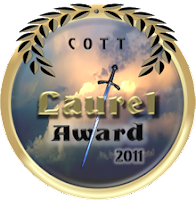 Portions of that story—Fairer Than Morning—won the majority of COTT reader votes in June when it took the victory in the “Best Protagonist” ring. In November, it competed against a long list of other COTT champion novels then took home the Laurel. More hearty congratulations go to author Rosslyn Elliott for her win.


The Saddler's Legacy series is inspired by a real family in American history--the Hanby family, who are to this day the most celebrated citizens of Westerville, Ohio. 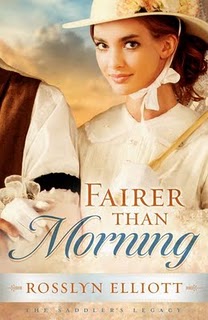 About Laurel Award-winning novel, Fairer Than Morning:
Ann dreams of a marriage proposal from her poetic suitor, Eli—until Will Hanby shows her that nobility is more than fine words.


On a small farm in 19th century Ohio, young Ann Miller is pursued by the gallant Eli Bowen, son of a prominent family. Eli is the suitor of Ann’s dreams. Like her, he enjoys poetry and beautiful things and soon, he will move to the city to become a doctor.


When Ann travels to Pittsburgh, accompanying her minister father on business, she meets Will Hanby, a saddle-maker’s apprentice. Will has spent years eking out an existence under a cruel master and his spirit is nearly broken. Anne’s compassion lights a long-dark part of his soul.
Through his encounters with Anne’s father, a master saddler, Will discovers new hope and courage even in the midst of tremendous adversity.


When the Millers must return to Ohio and their ministry there, Will resolves to find them, at any cost. If Will can make it back to Ann, will she be waiting?


Learn more about the book as Clash of the Titles staff interviews the author:

Hostess Raqul Byrnes asks, “What led you to use the inspirational Hanby family and how did you first come to know about them?”
Rosslyn: After I finished my doctoral dissertation, I decided to try my hand at writing my first historical novel. I was living in Westerville, Ohio at the time, so I decided to go visit a small local house museum so I could research all the kitchen artifacts and farm tools. Before the tour, a guide took me into an outbuilding and showed me a video about the Hanby family, who had lived in that house. By the time I stood up thirty minutes later, I knew that I had just been given an amazing true story that needed to be told. The Hanbys lived romantic, action-filled lives marked by courage, and most importantly, they served others out of faith and love.


Hostess Lisa Lickel asks,“Rosslyn, what does “nobility” mean to you and to the era of your story and today? What made you choose that character trait?”
Rosslyn: The origin of that word on the back jacket of the book is that when my publisher and I were creating jacket copy, I had to come up with a condensed way to describe what it means to find a man of true value. And both in Ann’s time and today, the words noble man mean a man of great worth and high virtue. It also made a nice contrast with the apparent gentility and breeding of one suitor, who would fit the other meaning of nobleman far more obviously than the ragged Will Hanby!


Assistant Editor Michelle Massaro asks, “What circumstances led up to Will Hanby's down-trodden situation?”
Rosslyn: In the novel, we learn that Will’s parents and his sisters all died of a virulent form of tuberculosis which killed much more quickly than ordinary TB. (The novel never reveals this in such specifics, but the TB was disseminated bovine TB, for those who care, acquired through milk ingested on a visit to a cattle farm, when Will and his brother were not with the others!). Their deaths left only Will and his younger brother, who were forced to indenture themselves to farmers to avoid infection and work in exchange for food and board. The farmers were kind, but Will ends up under a much harsher master when he signs a new indenture with Master Good.  The historical facts behind what happened to the real William Hanby were somewhat different, but the effect was the same: out of dire poverty, he indentured himself in his youth to Master Good, and much of what followed was what also happens in the novel.


Talent Scout Katie McCurdy asks, “Which character, not counting Ann or Will, is your favorite? Did you have a certain character that kinda suddenly took a main role that you didn't forsee when you plotted Fairer Than Morning?”
Rosslyn: My favorite supporting character is Ann’s father, Mr. Miller, whom I admire so much that I honestly wonder how I wrote him sometimes. His was the part of the novel that seemed most spirit-led. But the characters who suddenly appeared onstage who weren’t part of the novel at all, in the original sketchy outline, were Mr. and Mrs. Holmes and their daughter Amelia! They showed up on that steamboat and began to take on a life of their own, and before I knew it they were a major subplot.

Listen to Another Interview:
After her Laurel Award win, Author Rosslyn Elliott was also interviewed by Christian Authors Guild board member, Cynthia L. Simmons. This is a podcast you won’t want to miss. You can listen to in our sidebar or find it by visiting this link.


The second in the series, Sweeter Than Birdsong, releases next month and promises to be just as compelling as the first. Below, in two short, yet intriguing excerpts, the author shares a taste of what’s to come. 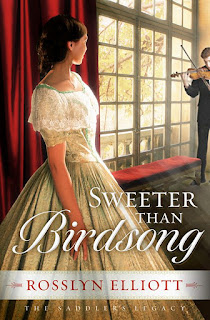 But first, here’s a brief summary of Sweeter Than Birdsong, book two in the Saddler’s Legacy series.


Music offers Kate sweet refuge from her troubles… But real freedom is sweeter.


In Westerville, Ohio, 1855, Kate Winter’s dreams are almost within reach. As the first woman to graduate from Otterbein College, she’ll be guaranteed her deepest wish: escape from the dark secret haunting her family. But with her mother determined to marry her off to a wealthy man, Kate must face reality. She has to run. Now. And she has the perfect plan. Join the upcoming musical performance--and use it to mask her flight.


Ben Hanby, Otterbein College’s musical genius, sees Kate Winter as an enigmatic creature, notable for her beauty, yet painfully shy. Then he hears her sing—and the glory of her voice moves him as never before. He determines to cast her in his musical and uncover the mystery that is Kate. Still, he must keep his own secret to himself. Not even this intriguing woman can know that his passionate faith is driving him to aid fugitives on the Underground Railroad.
A terrifying accident brings Kate and Ben together, but threatens to shatter both their secrets and their dreams. Kate can no longer deny the need to find her courage—and her voice—if she is to sing a new song for their future.


Westerville, Ohio 1855
Her customary walk across the college quadrangle had become an executioner’s march.
Kate’s heeled shoes clunked over the flagstones. Her full skirt and horsehair crinoline dragged from her waist, too warm even for this mild May morning.
She climbed the stone steps of the whitewashed college building and laid hold of the black iron door handle with a clammy palm. The dim foyer led to the lecture hall. Her breath came faster and her corset squeezed her lungs. It had not felt so tight when the maid laced it an hour ago. Up ahead loomed the dark rectangle of the hall’s oaken door, which stood ajar.
She paused on the threshold. Inside the hall, a baritone voice lifted in clear, well-balanced phrases. The speaker’s persuasive power carried even here. Ben Hanby. He was the best orator in the class. She laid a hand to her midsection to quell the pulsing nausea there. If she did not go in now, she would not go at all.
At her push, the door swung open to reveal rows of masculine shoulders in dark coats, all heads turned toward the speaker. Each gentleman’s neat coattails fell open over his knees, black against the polished wood floor. Each white collar rose to the sweep of hair worn according to the current vogue, longer than a Roman’s but never past the collar.
On the raised platform beyond them, Ben Hanby stood, as natural and poised as if he were alone in the room, his dark hair thick over his brow. His eyes were intent, his face alive with interest in his subject, but his words floated past Kate in a wash of sounds her jumping nerves could not interpret. Of course speaking came easily for him—his father was a minister.
He finished with a question to the audience, and even her disrupted attention caught the subtle humor in the lift of his eyebrow as he delivered his line straight-faced. A chuckle rose from the young men, echoed in the lighter laughter of the small party of young lady scholars seated with their chaperone on the end of the front row.
Ben Hanby descended the stairs, the barest smile appearing as he exchanged glances with his friends.
“Miss Winter.” Professor Hayworth’s bass rumbled across the hall.
Heads turned toward her. Her skin tingled in waves of heat, her heart kicked in an uneven cadence. Could it stop from such fright?—the thought made it worsen, like a stutter in her chest that could not move on to the next beat.
“I am glad you choose to join us today.” Professor Hayworth spoke to her from the dais, beside the podium, full bearded in his formal black robe. “You have arrived just in time to give the first of our ladies’ speeches.”
She avoided their curious stares as her pulse quickened and her mouth dried.
“Please proceed to the podium,” he said.


All was quiet and dark. The boat bobbed like a cradle soothing a baby to sleep.
It didn’t calm Kate, who sat immobile in the prow. She laced her hands together in her lap where John Parker could not see them and dug her fingers into the back of her knuckles. She couldn’t stop the faint tremble that had started inside her and traveled to her hands. He mustn’t see her shaking or he would think her unfit for the errand.
The chirp of crickets set a rhythm for little splashes from the oars as John rowed them toward the Kentucky side. They were quite close now.
She must shake off this dreamlike state. She peered at the riverbank as far as she could see to left and right. At least there was no sign of a lantern.
They bumped up against the reeds. John jumped out, heedless of the mud and several inches of water. He lashed the tow rope of the fishing boat to a birch tree.
She must move now. She clambered over the side and into the dark water.
The unfamiliar feeling of the breeches increased her sense of having traveled to some different life, some strange body. It could not be she, traipsing around the wild in men’s trousers. Someone else entirely had come on this errand—someone braver and stronger who just happened to resemble her on the outside.
A few waterlogged steps brought her to where John stood on the riverbank, like the shadow of a tree in the moonlight.
“This way.” He walked ahead of her, straight towards the thickest tangle of thorny bush.
****
If you would like to join the COTT Blog Alliance tour for this award-winning novel (Jan 14-18), please email us at contactcott(at)gmail(dot)com.
Posted by Sidney W. Frost at 9:20 AM