From the first clap of thunder to the conclusion of the book,
Julie B. Cosgrove holds the reader in the palm of her hand.
--Author Victoria Pitt Caine 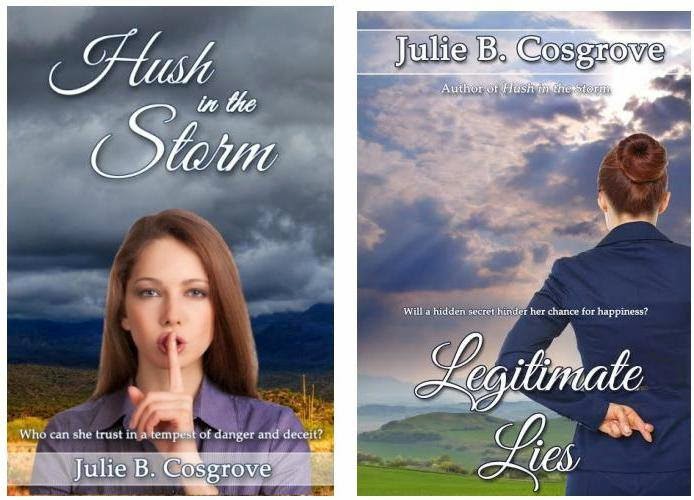 About Hush in the Storm:

Jen, a young widow floundering in the storm of mourning, whose only lifeline is her humdrum job, is tossed into a maze of deceit and intrigue by a coworker named Tom...at the request of her late husband, or so Tom says. He kidnaps her and fakes her death to keep her safe from the cartel who he thinks caused her husband's "accident." Together, they are thrust into a tempest of danger and deceit where no one is whom they claim to be. The list of people Jen can believe in keeps diminishing. Who can she trust while dodging the Feds, human traffickers and the press who've discovered she's alive? How will Jen rescue the two held-captive girls she befriends without drowning them, Tom, and herself in the waves of betrayal, especially when she's begun to suspect her husband may not be as dead as everyone thinks...

Jen assumes she can escape her past after she testifies against Robert, her human trafficking mogul husband, and enters into witness protection under a new identity. That is until a baby shows up on the stoop of the library where she works, and another man from her past, Tom, appears in her living room. Now she must relocate again under yet another name and memorize a new set of legitimate lies to explain who she is.

When Robert discovers her latest identity, he has other plans for her, such as enslaving her in a Tudor manor in Southern England. The scandalous family secrets she discovers may hold the key to her and the daughter of the manor’s freedom. But first she must tunnel through a myriad of lies, including the dark sin which has held her own heart captive. If the truth is revealed, will it hinder her one chance for happiness?

What COTT Voters Had to Say:


--I have loved all of Julie Cosgroves books . Always waiting for the next one!!!
--I was eager to read Legitimate Lies and found it to be that most rare of all books. ..a sequel that is even better than the first in the Series! Author Julie Cosgrove tells a tight, well paced story which sweeps the readers along in a swirl of suspense. A protagonist in Witness Protection needs to learn to rely on the Lord s she seeks to discern whom she can trust and what is true, when her life seems to depend on a fragile web of legitimate -and not -so -legitimate -- lies. Her personal and spiritual growth made this a powerful and enjoyable book to read. I loved it and recommend it whole heartedly!
--Julie, this is one of the best books I've read. Can't wait for the sequel.
--Julie Cosgrove writes non-stop action and deeper meaning into her plot. Legitimate Lies is a good read.
--Great job, Julie! Keep up the good work. Proud of you :-)
--Julie Cosgrove is an excellent writer.
--Every book looks inviting, but Legitimate Lies captures my curiosity. Good job, Julie!
--Really enjoying Julie's latest!

Bible studies. She writes regularly for several Christian websites and publications and has been published in the Chicken Soup for the Soul, Faith Filled Family Magazine, Upper Room's Devozine and Alive Now, The Secret Place, Light from the Word, The Journey and Good News Daily.
Julie has published three Bible studies, an inspirational, a devotional and several novels - Focused (2012), Hush in the Storm (2014) and Legitimate Lies (2015). She is contracted for two more novels: Freed to Forgive (2015) and Navy Blues (2016), with two more in process.

Julie has one grown son and lives in Fort Worth, TX with two cats.