Clash of the Titles' Laurel Award is in full swing with submissions just having closed and judges itching to get started. It'll be another three mail-biting months before the winner of the 2013 Laurel is announced. In the meantime, COTT continues to shine the light on its past winners, including Karen Witemeyer whose novel, "A Tailor-made Bride" won the 2011 Laurel. Today, COTT brings you her latest, "Stealing the Preacher." 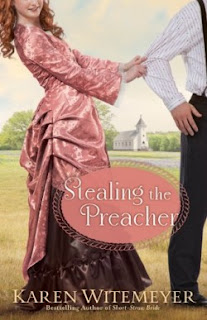 ABOUT THE BOOK:
On his way to interview for a position at a church in the Piney Woods of Texas, Crockett Archer can scarcely believe it when he's forced off the train by a retired outlaw and presented to the man's daughter as the minister she requested for her birthday. Worried this unfortunate detour will ruin his chances of finally serving a congregation of his own, Crockett is determined to escape. But when he finally gets away, he's haunted by the memory of the young woman he left behind--a woman whose dreams now hinge on him.

For months, Joanna Robbins prayed for a preacher. A man to breathe life back into the abandoned church at the heart of her community. A man to assist her in fulfilling a promise to her dying mother. A man to help her discover answers to the questions that have been on her heart for so long. But just when it seems God has answered her prayers, it turns out the parson is there against his will and has dreams of his own calling him elsewhere. Is there any way she can convince Crockett to stay in her little backwoods community? And does the attraction between them have any chance of blossoming when Joanna's outlaw father is dead set against his daughter courting a preacher?


The author shares why she wrote the book: 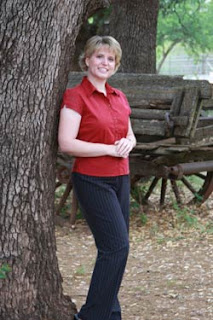 "After the amazing response to the Archer brothers depicted in Short-Straw Bride, I couldn't wait to craft a stand-alone story for Crockett, the charmer of the Archer clan. First, I had a gang of over-the-hill outlaws steal him from a train then tangled him up with the gang leader's daughter, a heroine with enough sense to look beneath his charm and sufficient spirit to fight for what she wants. Finally, since Crockett is no ordinary preacher, but a gun-toting rancher with a gift for doctoring . . . well, that meant a plot full of scrapes, trouble, and untold shenanigans. But amid the adventure and romance lies a heartrending tale of God's pursuit of a single lost soul." --Karen Witemeyer

About Karen:
After growing up in California, Karen moved to Texas to attend Abilene Christian University where she
earned bachelor and master's degrees in Psychology. It was also there that she met and married her own Texas hero. He roped her in good, for she has lived in Texas ever since. In fact, she fell so in love with this rugged land of sweeping sunsets and enduring pioneer spirit, that she incorporates it into the pages of her novels, setting her stories in the small towns of a state that burgeoned into greatness in the mid- to late1800s.