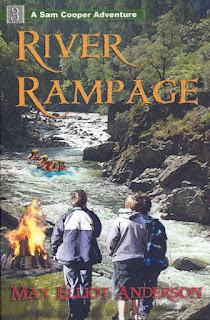 A hearty congratulations to Max!

A special thank you to all the talented authors who were part of this fun week!

About River Rampage:
Sam Cooper and his friends have the chance of a lifetime to go rafting down the mighty Colorado River. The rains have been heavy this season, making the raging river even more treacherous. The boys become separated from the main group, their rubber raft is going flat, and now they're on their own. They have their hands full with a crusty prospector, his gold mine, a gang of outlaw bikers, and a desperate river escape on their makeshift wooden raft. Think that's the worst that could happen? Well, it isn't.

"Sam Cooper Adventures are like good, family movies . . . as an ordinary kid finds himself in exciting and extra-ordinary adventures!" Bill Myers - Author, McGee & Me

River Rampage Review
By Wayne S. Walker
Do you think that you would enjoy going down a raging river on a raft? Twelve-year-old Sam Cooper and his family have moved to Harper's Inlet on the Treasure Coast of Florida. His new friend, Tony Dodds, invites him and another friend, Tyler Peterson, to take a white-water rafting trip on the Colorado River in Utah with Tony's Uncle Harlan. After some initial hesitation Sam's parents give their permission, so Sam gets all his gear ready and Tony's father drives the boys to Moab, UT. Everything is planned to make the trip as safe as possible, but the unexpected can always happen. And with Sam, Tony, and Tyler, it usually does.
The second day out, the rope tying the boys' raft to the one ahead of it catches on a small log wedged into some rocks and snaps, leaving them stranded. Battling the raging waters in a raft that is punctured by a rock and is now taking on water, the three manage with great difficulty to bring the raft to shore in a very desolate place. Then when they try to walk out, they find themselves in a box canyon with a kindly old prospector named Gus who has found a gold mine but is trapped in by a group of motorcycle-riding claim jumpers. What can the boys and Gus do? Is anyone looking for them? Will they ever be able to escape?
If your tween boys, and girls too, like adventure and excitement, they simply have to try Max Elliot Anderson's books. I've never read one that I didn't like. There is nothing objectionable. Families are usually presented as father, mother, and children in loving relationships. That's not to say the kids in them never face any problems, but there are always appropriate solutions which meet the needs. I like the way that Sam and his friends attend church services, believe in prayer, and look to God for guidance. Yet, the tone is not "preachy" but just filled with good, clean fun. Most of Anderson's other books have had completely different characters and settings, so a series is a departure for his writing. Book number 1 of the Sam Cooper series is Lost Island Smugglers, which I have read, and book number 2 is Captain Jack's Treasure.

No wonder one of our voters says, “Max Anderson's books are always a favorite with my boys!!!” 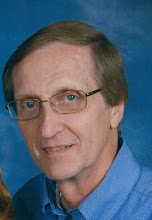 His background in film adds a dramatic boost to his books.

Max grew up in the film production business. His father, Ken Anderson, was the founder of Gospel Films in Muskegon, Michigan, and later, Ken Anderson Films. At the age of eight Max was "killed" by a hit-and-run driver, while riding his bike in one of his father's motion pictures. But, since the film was being shot in black & white, the blood came out of a chocolate syrup bottle.

As an adult Max excelled in film and video production. He won Best Cinematographer for his work on the feature film, "Pilgrim's Progress." This was also the first feature film for actor Liam Neeson, known for his work in "Schindler's List," "Star Wars," and other films. Mr. Anderson has also won national Telly awards for his productions of "Youth Haven," "A Safe Place for Kids," and "Tracy's Choices." "Tracy's Choices" was also awarded Best Christian Documentary. Other programs he has produced have won numerous local, regional, state, and national awards.

Author Jerry B. Jenkins says, "Max Elliot Anderson brings a lifetime of dramatic film and video production to the pages of his action adventures and mysteries."

Max says, “Even though I grew up in a house full of books--my dad was an author of over 70 books--I didn't love reading like my siblings. I’d be the first person to tell you I was a reluctant reader….”

Five years ago Max decided to explore why. He says, “In that research, I discovered a pattern: the books I looked at just didn't interest me. The style was boring, the dialog was sometimes sparse or when it was used, it seemed too adult. I was looking for action, adventure, suspense, and humor.

“I started writing action-adventure & mystery books that I would have liked if I could go back in time. My books are written for 8- to 13-year-olds, especially boys, who are reluctant, unhappy, or struggling readers. Yet they are also enjoyed by avid readers too.”

Now that Max has a career in film and books, he says, “The responses to my books have been the most surprising, and rewarding. Newspaper Caper, Terror at Wolf Lake, North Woods Poachers, Mountain Cabin Mystery, Big Rig Rustlers, Secret of Abbott's Cave & Legend of the White Wolf are compared by readers and reviewers to Tom Sawyer, The Hardy Boys, Huck Finn, Nancy Drew, Tom Swift, Scooby-Doo, Lemony Snicket, and adventure author Jack London.”

Max is listed in WHO'S WHO in Finance and Industry, Entertainment, Advertising, The Midwest, Emerging Leaders in America, The World, and WHO'S WHO In America (1999 - present).

Guest Post by Gail Pallotta A former Clash of The Titles winner, Gail has published two hundred articles, several poems, one short story and two books. She's a 2004 regional writer of the year for the American Christian Writers Association.
Posted by Sidney W. Frost at 7:28 AM